Lake Namtso & thoughts on my time in Tibet

June 17, 2016November 12, 2017 By The Wandering Vegan
My trip to Lake Namtso was really interesting in sevearl different, unrelated way. First, it was supposed to be a 2-day trip, going out on the first day, camping near the lake, and coming back in the evening of the 2nd day. With the tightening government restrictions (something is really going on in Tibet right now), no foreigners were allowed to camp out in the area, so it turned into only a day trip on DAY 5.
The lady who met me at the train station showed up around 7:15am, and we walked down to another hotel, where a large group was staying and would form the bulk of the tour group for the day. This group had done a longer trip in Tibet, including returning the night before from Everest Base Camp, which is quite far away. We were informed that the trip to the lake was 5 hours each way on the bus, and half of their group said, “No way.” There were now only 9 of us, instead of 20. After spending 12 hours on a bus the day before, I couldn’t really blame them for not wanting to spend 10 hours on a bus that day. This also meant that we had an unnecessarily large bus for the trip, and the bus had some great incorrect grammar on the side. Here we go! 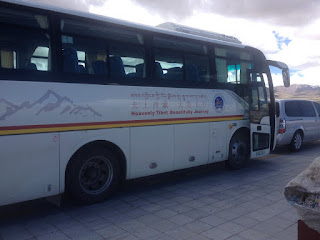 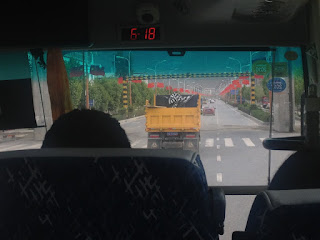 Along the way, we stopped for 2 bathroom breaks and a communal-style lunch, since things would be closed on our way back toward Lhasa. With leaving the city a little before 8am, we didn’t arrive at the lake until after 1pm, with the stops and lunch. Crazy!
The thing that really started getting my attention was all of the military checkpoints we had to go through, showing our travel documents, passports, etc.—proving our right to be traveling through this area. For calling it the “Tibet Autonomous Region,” Tibet really has ZERO autonomy. The Chinese military and police heavily control who goes where, and this was super obvious on our drive—made even more obvious by the fact that we were required to have a police officer ride in our bus for the trip. I guess they really want to make sure to know what we are up to. It was obvious from the start that “autonomous” had become a joke in the name of the Tibet region.
Along the drive, the views from the window were really amazing. We saw a lot of mountains, great cloud formations, and herds of yaks and goats and sheep. It was surreal and really gorgeous. 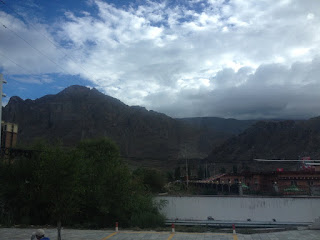 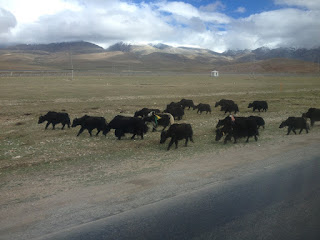 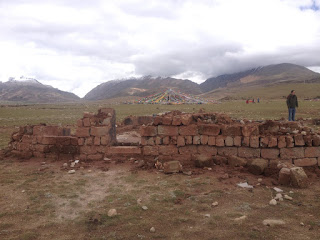 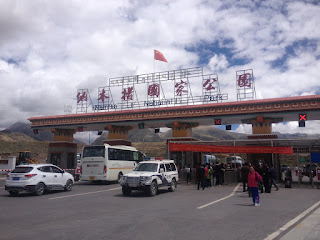 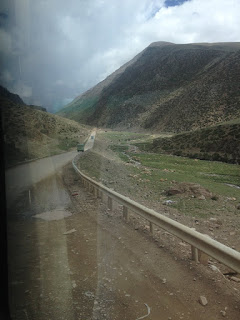 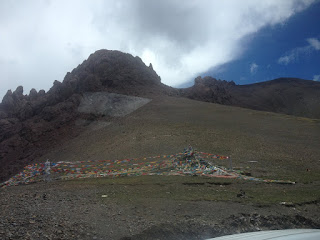 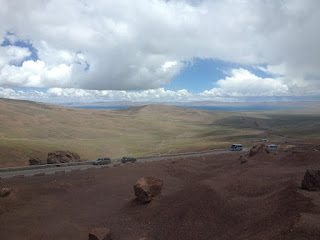 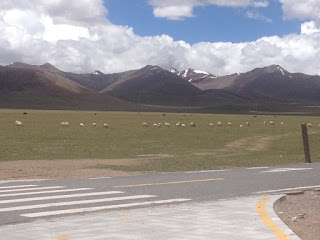 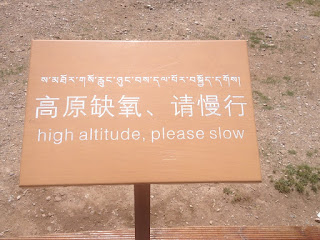 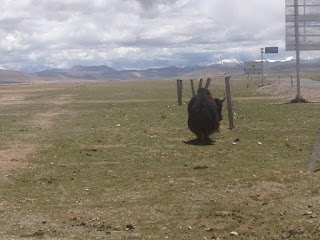 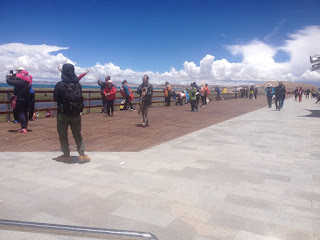 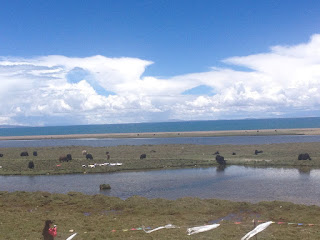 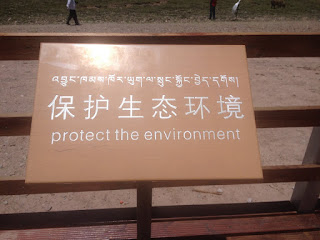 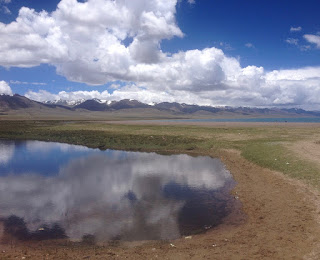 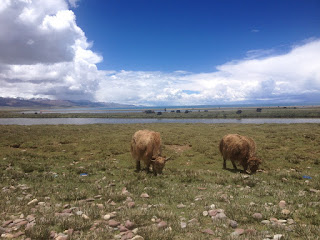 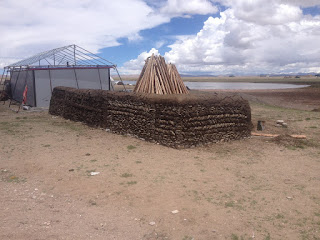 On the way back from the lake, we also stopped at the top of the mountain pass (5km / 3mi high), where there are some great views and lots of prayer flags for the safety of travelers. 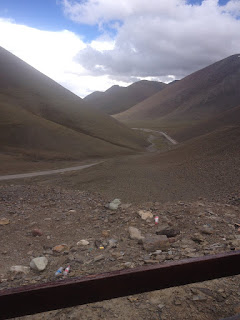 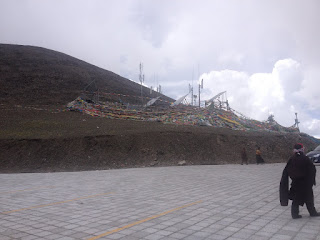 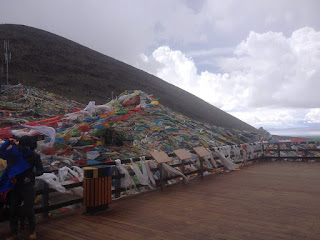 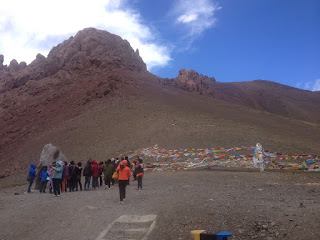 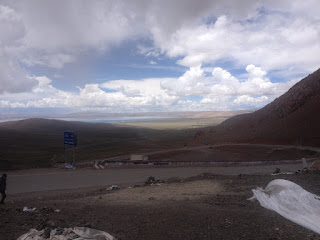 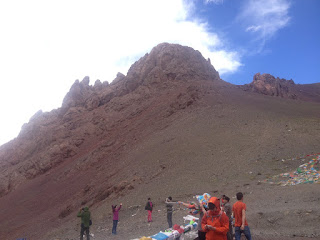 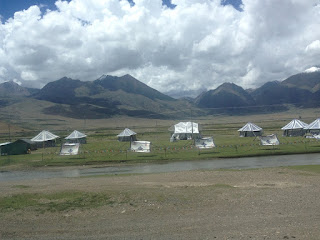 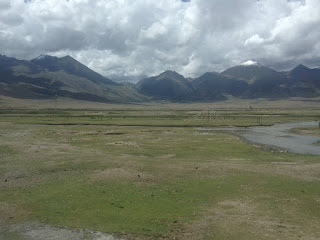 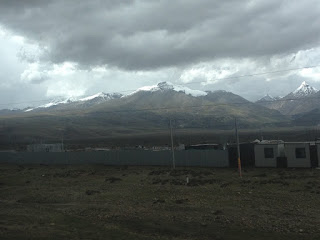 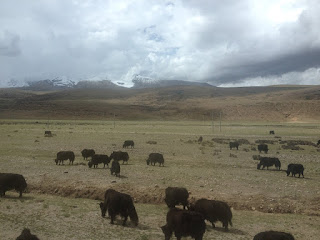 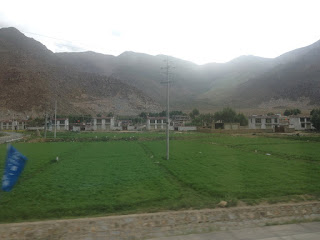 At the lake itself, I was surprised by how touristy it was. I had expected the distance from Lhasa to protect Lake Namtso from the bustling crowds, but there were TONS of tour buses there. It’s so touristy that they had one of those booths where you can pay to dress up in traditional Tibetan clothing and have your picture taken. Talk about cultural apporpriation! Chinese tourists show up, play Tibetan for a fee, and take home pictures of themselves in the traditional clothing of the people who are losing their culture and identity under Chinese rule.
I say that because my views on Tibet and the struggles there were really enlightened by some conversations I had with Tibetan people out at the lake. Lake Namtso (also called Nam Co) is a holy site for Tibetan Buddhism. From talking with locals, I learned a lot about the struggles Tibetan people face. Here are some (non-exhaustive): the language of instruction at schools is Chinese, and you have to learn Tibetan at home/not use it at school. Objective, Tibetan history is not taught at schools; instead, Chinese “we saved you” revision of Tibetan history is taught, and the government censorship prevents Tibetan students from really learning their history objectively. Chinese revisions of history teach that Tibetans were practicing human sacrifice and needed saving from themselves, though there’s no evidence of this. Tibetan people are not permitted to get passports or come & go as they please, with the numerous checkpoints as proof of this (both along the roads and checkpoints within the city of Lhasa, of which there are many). Tibetan people cannot get passports and therefore cannot ever exit China legally. The Dalai Lama, who is a spiritual and political leader for the Tibetan people, is banned from both China and Tibet, so the people feel somewhat lost in their future and identity. ALL police and military I saw in Tibet were Chinese people; Tibetans feel oppressed by the heavy presence of police and military and therefore don’t join these organizations. It struck me as similar to cities in the US where white police control black neighborhoods, creating a sense of mutual distrust and oppression. If Tibetans want to learn their history and have access to objective information, they will illegally sneak out to India for university studies, learn English/history/etc. and then sneak back into Tibet to return as tour guides, hotel staff, etc. in the tourism industry, using their English skills and knowledge of Tibetan history to try to support the community & support their families by getting a good job.
It seems like a really hard life, when your identity is being crowded out, your community does not control its own destiny, and the people who control it are constantly telling you that they know what’s best for you. Yes, the Chinese government has added schools, bridges, and roads, but at what price? That’s the question I keep asking myself—the same one most Tibetans and people paying attention to Tibet are asking themselves. I’m still wrestling with these questions. I feel like I learned a lot, got a lot to think about and process, and saw some amazing sites, but at what price? Are the Tibetan people better off with the opening of tourism in the area, or are they worse off, because the Chinese government now sees dollar signs over Tibet? Are the Tibetan people the real beneficiaries of the rise in tourism, or is the Chinese government exploiting Tibetan culture for tourist dollars while also trying to stamp out Tibetan culture through Chinese instruction/”cultural revolution” in daily practice?
It’s a lot to think about. I really liked Tibet, and I feel like I saw & learned a lot, but I’m not sure that I would go back under the current system of “autonomous” completely-not-autonomous administration.
If there’s any doubt that Tibet lacks any real meaning behind calling it an “autonomous region,” look at the fact that every business has been recently forced to put up either a Chinese flag or a picture of Chinese leaders. 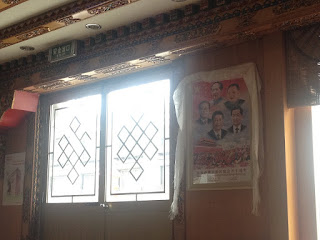 It would be MASSIVELY complex and difficult for Tibet to become a free, independent nation again, but the current price of a lack of sovereignty is heart-breaking. In China’s attempts to “modernize” Tibet and do “we know what’s best for you,” Tibet is becoming less like Tibet and more like China, and it’s massively obvious from spending any amount of time there. It’s really sad, and I hope that the future will provide a solution that allows for a peaceful return to Tibetan independence. Even with a lack of bloodshed in the current state of things, cultural oppression and control of your daily life by someone else isn’t “peaceful.”
Next post: Chengdu, China
30.664439390.6393702
This entry was posted in asia, lake namtso, lhasa, tibet