Living the good life on Koh Tao island, Thailand (with some setbacks)

The train was definitely my worst in Thailand. There was a Thai family occupying the 3 beds around me, and their 5ish year-old daughter was playing games on the iPad until after midnight, with the sounds on, and the parents got mad at me when I tried to ask them to turn off the sounds (through a language barrier, which didn’t help). With ear plugs in, the sounds of kids’ electronic games still permeate. I didn’t sleep much.

At 4:30, I got off in Chumphon with everyone else who was headed to the main islands in the Gulf of Thailand. There are 2 ferry companies, and I’d saved money by buying a joint train-ferry ticket, so that was good. We waited until 6 for the bus to the ferry, it poured rain on anyone not sitting under the station’s overhang, and then the bus arrived just after sunrise. It advertised karaoke on board, but it was much too early for that. 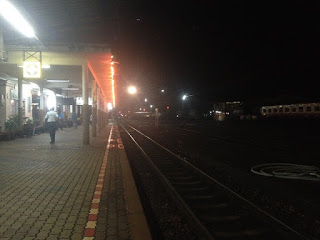 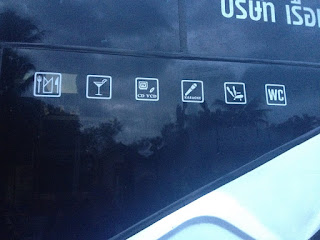 At the ferry port, disorganization is something you wouldn’t expect from a company that does this daily, multiple times a day. The boarding process was chaotic, to say the least. However, I did see 2 people in line that I recognized from Vang Vieng, in Laos, so I talked to them for a bit. We’d gone tubing together; now, they were headed to Koh Phangan for the famous “Full Moon Party.” Everyone asked if I was going. What makes people think I have any interest in being around thousands of people drunk out of their minds, high on mushrooms, covered in body paint, and dancing to bad techno until sunrise? Nope. 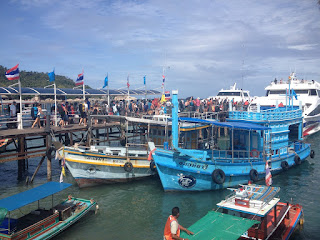 My mission in Koh Tao was to do a bunch of scuba diving, and a guy from the Big Blue Diving Resort was walking around on the ferry, talking to people, and giving out info. I didn’t need reservations at a “diving resort,” but I was interested in diving. Their resort was also in the next town up (Sairee) from where the ferry would stop, so he said I could just ride in their free taxi from the pier, get some info, and book something or not. Seemed like a good plan, instead of paying for the taxi.

By taxi, they meant “sit in the back of a pickup truck.”  This became a staple of time in Koh Tao.

At Big Blue, I got some info, and was glad to see a dive shop actually talking about the impact of the seafood industry on the oceans (for every 1 pound of fish they catch, they catch 5 pounds of unintended other animals, like sharks, dolphins, squids, wrong types of fish, etc.). The meat industry is the #1 polluter, also, but that’s not popular to talk about. 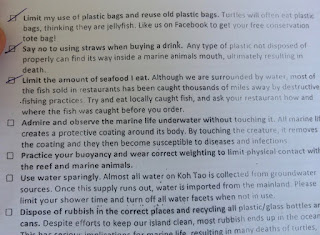 From Big Blue, I walked over to my hostel, Spicy Tao. This place was…interesting. The guy working morning shifts at the desk was from LA, and we had some decent conversations. The hostel was laid-back, some nights left the whole dorm for just me (when everyone left for the full moon party), it was the cheapest thing on the island, and it had a decent vibe for the first few days. However, they had constant problems with power & water, I never got a running shower while I was there (only using a bucket to wash up), they had issues with overbooking certain beds, and I finally left when they gave away my bed to someone else one night. Really fun to come back late at night, exhausted, just wanting to sleep, and there’s someone else in your bed + no employees there to provide answers. 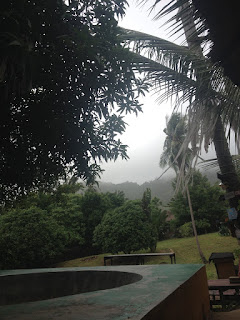 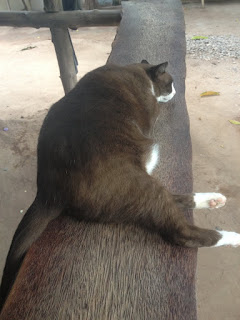 However, the hostel did recommend that I check out Mojo Divers, which gives discounts on your first dive, if you’re staying at Spicy Tao. Solid.

I walked down to Mojo, signed up for the morning boat, and then walked around the town. The next morning, I was on the boat for sunrise, hit the water shortly after, and did some decent dives while meeting some great people. 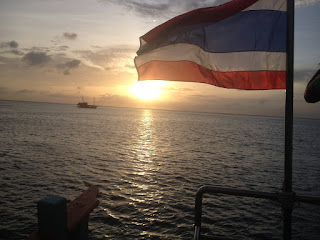 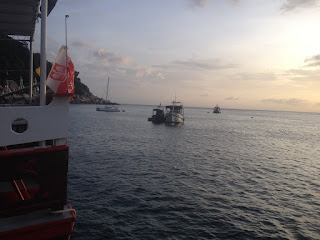 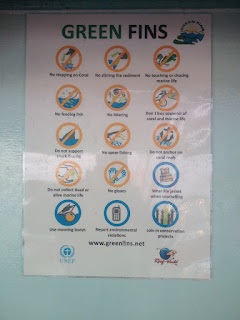 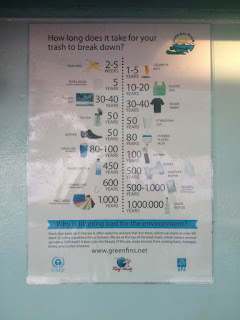 Back at the hostel, I noticed that they had some weird/offensive signs, like the one blaming women for their choice of outfits when they get sexually harassed (rather than the harasser) and this crazy English sign (is it a poem?). 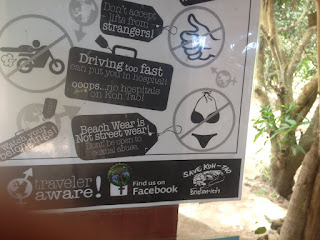 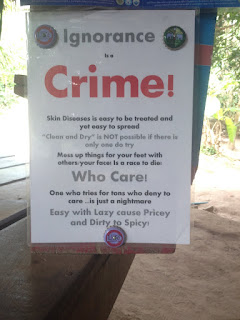 That night, I went out and did a night dive with Mojo. It was a really great dive, and I had a great time. The other 2 divers where doing their final dive for the advanced certification (which requires a night dive or “low visibility” dive), and everything was going great, until we came up to the surface and swam back to the boat. We found a bunch of jellyfish, and I got stung really badly on the arm. The tentacles came off the jellyfish and stuck to me, so I had to peel them off, which meant getting the fingers of my other hand stung, and then getting doused with vinegar, when we got back on the boat. Fun times. The sting was so bad that it burned some of my skin and gave me raised bumps in stripe patterns. It burned for a few more hours but started feeling better the next day. Nearly 2 weeks later, it still hasn’t healed.
The next morning, I went out for another set of morning dives, wore a wetsuit this time (I’d been diving in just swim shorts, which is how my arms were bare), and then went straight to a shop to buy a long sleeve rash guard (no weight to it, just something to wear to keep your skin covered while diving or surfing). I also got to know the “shop dog” at Mojo: JoJo. 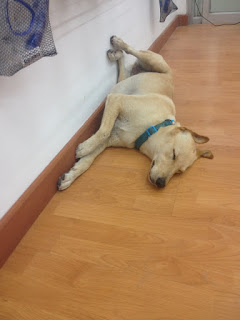 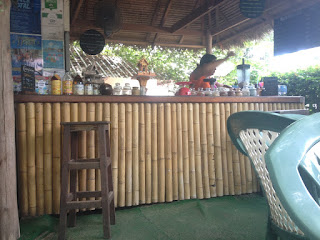 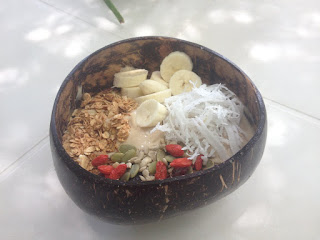 Basically, you choose some fruits, they blend it up with coconut milk, and it becomes a yogurt of sorts, served in a coconut bowl, topped with granola, seeds, nuts, coconut flakes, and banana slices. Delicious!
I fell into a rhythm of taking walks through the town, diving in the mornings, afternoon naps in the hammock, and taking on too much work to pay for the laptop disaster of recent memory. It was a pretty good life. 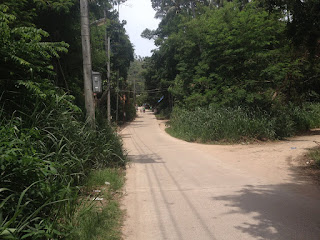 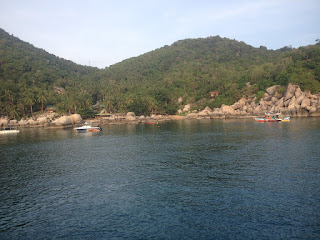 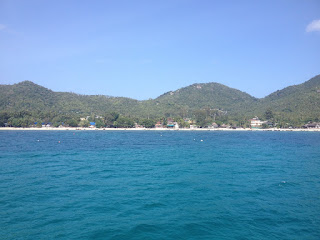 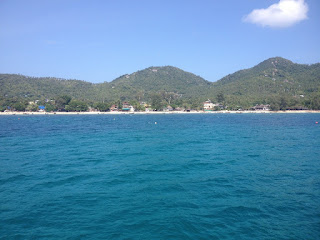 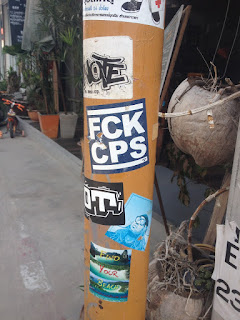 After diving for several days, I wanted to grow and challenge myself, so I signed up for the Rescue Diver course. It was a good 3 days of classroom learning and real-life training scenarios about how to save people / prevent accidents while diving.
The next to last night of the course, after a full day of academics, training in the water, and several hours of online work, I returned to the hostel, found someone sleeping in my bed (though all of my stuff was still next to it/under it) and no employees around to help sort it out. I looked in other rooms and didn’t see any empty beds, so I grabbed some of my stuff and headed to another hostel for the night. I stayed at Jizo’s, near the dive shop. Mistake!
I woke up in the morning and saw bed bugs on my bed. I smashed one and took it to show the owner. He shrugged his shoulders and din’t seem to care. I grabbed my things, said, “There are bed bugs! Bye!” to everyone sleeping in my room, and then left. I asked at the dive shop, and they set me up with a place to stay for the last night. I also went on Google Maps, Trip Advisor & Hostel World to destroy Jizo’s about their bed bugs.
I finished the last day of the Rescue course, hung out with some people from the dive shop, and realized I had no idea what to do next.
My friend R, who I met in North Korea/saw in Laos was in Phuket, on the other coast of southern Thailand, so I threw together some semi-plans and decided to head there the next day.
I had great times in Koh Tao. Sure, I got stung by a jellyfish, saw bed bugs, and had some hostel problems, but I met some great people, had a lot of fun, and left with some amazing memories.
I hope I’ll be back.
Next: Phuket for the end of my time in Thailand.
10.095610299.8403959
This entry was posted in asia, koh tao, thailand