Getting to Cuba from Cancun airport

The Aussie and I got up early, left the hostel before 9 (after telling the staff that we might be back and to hold our beds until at least 3pm, please) and took the bus to the airport. On the bus, we went over the airlines that offer flights to Cancun and which were our priorities. We decided to start with Cubana and InterJet, since they go direct, then AeroMexico was last, since the flight goes through Mexico City, which would take a lot longer.

When we arrived at the terminal, AeroMexico had a flight that was already open for check-in, we asked them about open seats and how much it would cost, but they had a standby list, so we went to the Cubana sales desk and met a travel agent who works with people trying to get to Cuba same-day. The Cubana desk itself doesn’t open until after 11. After the lady made some calls to the various airlines, our cheapest open was Cubana, flying direct to La Habana, Cuba around 3pm. That was still a while away, but it was direct, leaving today, and our cheapest option, so we set it up and were told to come back to pay when the Cubana desk was open.

Here’s where things get interesting: as a US citizen, no US-based credit cards or bank cards will work in Cuba, so you need to bring all of the cash you need for your whole trip. US Dollars have an extra fee when converting, so I decided to take Mexican Pesos. Even though I thought it was more than what I would need, I withdrew $500 worth of pesos from the ATM, which is the max my bank allows per day.

We got some lunch while waiting and then went to book our tickets and pay. The plot thickens when Cubana only accepts cash. I just gave away half of the money I had for Cuba by paying for my ticket and the tourist visa, but I still thought that I had more than enough money. TripAdvisor had said to expect $5/night for a hostel or something like that, and it’s a rather poor country, so we weren’t worried at all.

Check-in time was pandemonium. There is a 120 kg/person weight limit for checked items. Your average suitcase is about 1/6 of that. That’s an insane amount of weight, and people were using it. They were bringing TVs, refrigerators, A/C units, clothes – all kinds of stuff for their families. 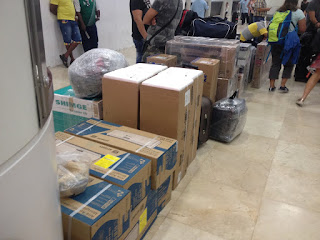 At no point during the ticket purchase, check-in, passport control, or even boarding did anyone remotely care that I had a US passport and was flying to Cuba. They didn’t even bat an eye. I encountered dozens of other people doing the same thing, and they all said that there were “no questions asked.” If you’re willing to buy the ticket and spend your money in Cuba, they’re excited to have you. The Mexican airport system is simply indifferent.

After waiting around for multiple hours, our flight was delayed for an hour. Awesome! During the weight, they also changed the gate from A terminal to B terminal without any kind of announcement, so that was great. Once we finally started boarding, we flew on this ridiculous, nondescript plane with no labels – what great Socialism! However, there was a Business Class, so I’m not sure what kind of socialism we’re dealing with here. 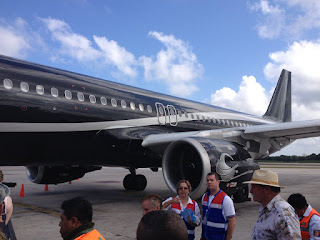 There were free drinks, peanuts, and the flight was decent, so Cubana is actually a pretty good airline.

On arrival in Cuba, I was asked (in English) if I had been to Africa in the past month, if I was feeling sick, and if I had anything more than just personal baggage with me. The passport agent did not stamp my passport (other people told me they were asked if they wanted a stamp or not) but just stamped my tourist visa, then I was on my way.

With all of the stuff people had brought, baggage claim took FOREVER. I waited nearly an hour for my bag to come out, and the Aussie waited another 10-15min. Ridiculous. We went through the “nothing to declare” line, no one stopped us or asked any questions, and we were outside in Cuba!!

Cost of plane ticket for same day trip from Cancun to Havana: $250 US
Cost of tourist visa to Cuba: $20 US
Flight time: just over 1 hour, plus a 1 hour time difference