April 8, 2016November 12, 2017 By The Wandering Vegan
My next plan was to go to Isla Ometepe, then Granada, then Managua in Nicaragua for going on to Honduras.  After one last great breakfast together, I said goodbye to the Canadians and took the bus to Rivas. It was a bummer feeling.
There are express buses from San Juan del Sur to Granada, at 5 & 6am, but I wanted to catch the ferry from Rivas out to Isla Ometepe, and the local buses run to Rivas every 40min from the same intersection where they arrive (near the pizza shop).
The bus costs 20 cordobas, if you have a bag in the back, and doesn’t take long to get to Rivas. I asked someone where I should get off, and he didn’t know, so another guy gave me some info. After this, nothing went right this day. The guy gave me completely wrong info, and I wound up in the Rivas central bus station (which is also a crazy market), and isn’t where I needed to be. The guy “felt bad” for making me wind up in the wrong spot, so he offered to give me a ride to where I needed to be. Mistake #2.  When he dropped me off, he wouldn’t unlock the back door to let me get my bag until I gave him $10 US. At this point, I was on a combination of a bummer mood, mad at getting ripped off / set up for a scam, and I decided to just take the next bus getting out of there in a northbound direction.
Cue the Rise Against song: “Deeeeeeestinaaaaation: Aaaanywhere but here.”
I wound up on an express bus to Managua, the capital of Nicaragua. Tip: don’t go here.
I think I paid 70 cordobas (about $2.50 US) for the bus, which took about 3 hours. OF COURSE, I couldn’t retrieve my bag without a 20 cordobas tip upon arrival in the mad-house southeast bus station in Managua. Things are just going great at this point.
Along the way, I had decided to just say “fuck it” to Nicaragua and find a hostel near the Tica Bus terminal, which offers long-distance express buses from major cities in Central America. The bus terminal is not close to this (not walking distance, anyway), so I got a taxi to “any hostel near Tica Bus.” It turns out there’s only 1 (Pandora Hostel), so the taxi took me there. Problem situation #3: the taxi driver thinks I don’t know the exchange rate and wants to charge me double what the price should be in cordobas. I finally threw some money at him for what I thought was fair and got out of the taxi.
I was literally the only person at Pandora Hostel when I arrived, other than the employee. I dropped my bags, walked to Tica Bus, and bought a ticket for the next day’s bus to Tegucigalpa, the capital of Honduras. It departs daily at 5am, but you have to show up at 4am for check-in procedures.
After some delicious lunch at Ananda, a Hare Krishna restaurant only 4 blocks from Tica Bus, I went back to the hostel and found that someone else had arrived. This is where things became nearly funny. A British girl was having tons of issues with her bank account, after her card got skimmed at an ATM. Shortly after this, an American girl showed up, and she wanted to get the hell out of Nicaragua, because someone had slipped her roofies the night before (she luckily got back to her previous hostel before anything happened). Everyone who showed up at the hostel was having a bad experience in the past 24 hours and just trying to leave Nicaragua. 1 American guy showed up a bit later with nothing but positive experiences, but he was the minority. The girl who got roofied booked a bus ticket going onto Guatemala the next morning, and we went to the station together at way-too-early o’clock the next morning. Different buses, but same time/procedures, so it was nice to have someone to commiserate with at that early hour.
Everyone passed the night in Managua with a simple dinner, going to the supermarket for supplies, and then watching movies at the hostel. Everyone was in too much of a bummer mood to try to do anything, and it didn’t seem like there’s anything to do near the hostel, anyway. I chucked it on the Nicaragua experience and decided to go on to Honduras to start fresh with a new passport stamp and a different currency. Before walking to the bus station, I made a quick hostel reservation online and looked up how to get there from the Tica Bus terminal on the other end.
Vegan food tip: Ananda has a plate of the day and a “pay by weight” option, and they understand about veganism, as long as you can speak some broken Spanish. Definitely go there. It’s at a major intersection and super obvious to spot from the street. 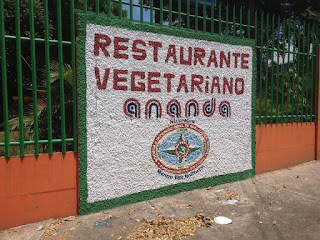 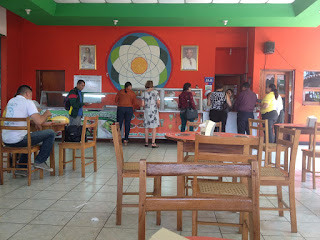