July 22, 2016November 12, 2017 By The Wandering Vegan
As I said, I almost got off the bus and stayed in Vang Vieng. I didn’t, and I enjoyed my few days in Luang Prabang, in northern Laos.

I had planned to keep going north and cross the border to Myanmar after Laos. However, I learned that this was not possible, for 2 reasons: 1-there are no buses running across this border, and 2-the online visa/visa on arrival options are not available for anything but flying into the 3 biggest airports in Myanmar. This meant that I would have to fly from somewhere, and I figured out that going back to Bangkok would make the most sense for more options and for cheaper options.

The road to Luang Prabang was beautiful, nonetheless, and it was a really nice ride. 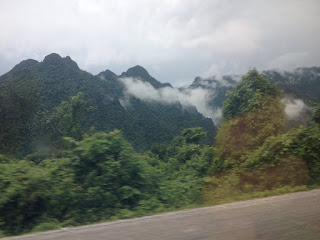 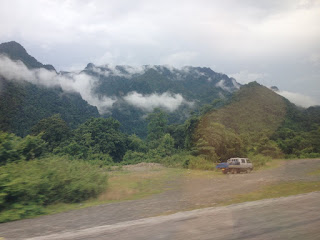 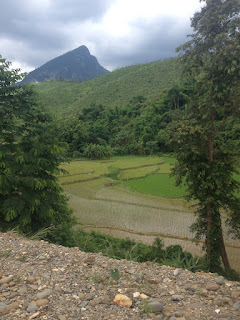 I arrived in pouring rain and wound up in a cluster of “how long can I wait before getting too hungry?” at the hostel. After getting berated by 2 just-turned-18 girls from the US for not liking Hillary Clinton (“Anyone who says anything negative about her is only doing it because that person is sexist and doesn’t like her because she’s a woman.” Yeah…OK. Maybe she’s just a terrible person?) Eventually, I went to dinner with them and walked around for a bit.

We wound up at the river for the tail end of the sunset, which was a cool start to my time in Luang Prabang. 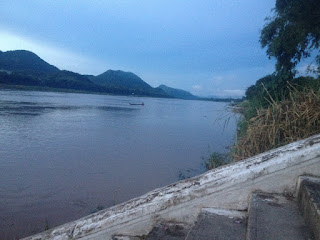 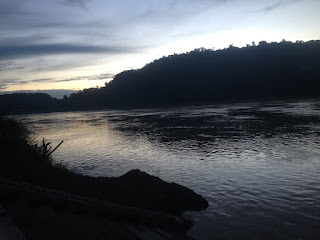 Back at the hostel, I asked about the famous morning walk of monks going to the temple and begging for food. Instead of going out on the main street at 5:30, a hostel employee said it’s possible to catch the monks coming in front of the hostel around 6 as they hit the neighborhoods for donations. I planned to do that with some people at the hostel and then went to bed. 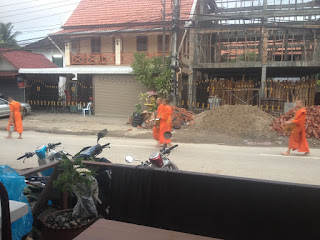 The Dutch girl was leaving for Vang Vieng later, but we all went to lunch together (I was introduced to the sandwich carts, which became a staple of my remaining time in Laos) before she went to the bus station & the rest of us got a shared van out to Tat Sae waterfall.

This involved taking a boat across the river and then paying to get into the nature park.

The falls, however, were AWESOME. You could swim, jump off different parts into the water, lay in the sun, etc. Great times. 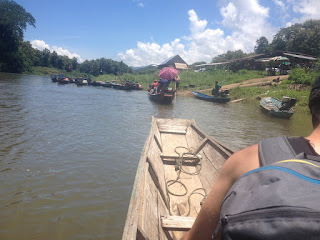 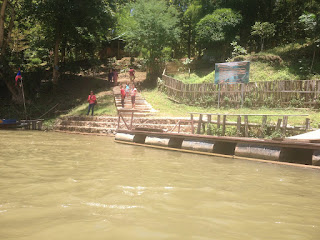 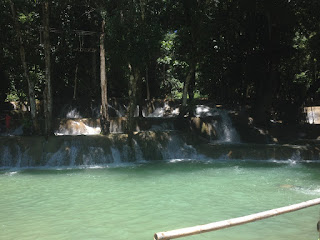 Back in the city, I went to the sandwich cart for dinner, walked around the night market, ran into a bunch of people I recognized from Vang Vieng, and wound up at the Utopia Bar/bowling afterward combo that is a staple for visitors to Luang Prabang. It was fun and funny.

The morning of day 3, I met a cool British-Pakistani guy at my hostel and wound up walking around the city with him. We walked by the Haw Pha Bang temple, which was closed, and then down to the bamboo bridge, which had been submerged by the recent rains. 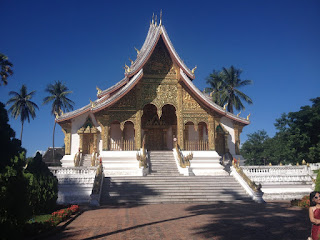 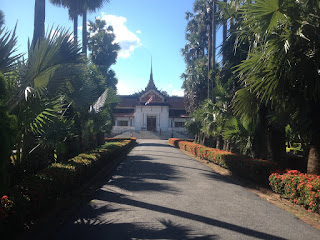 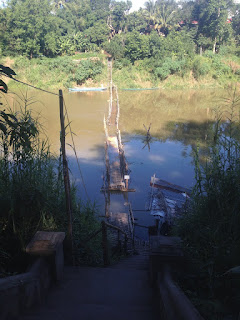 While walking along the river, we found bananas and jackfruit growing in the trees. 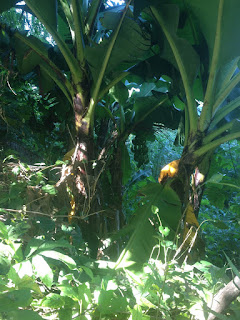 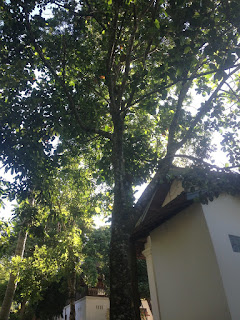 Back at the hostel, we linked up with 2 British twins who had checked into my room, and we planned to go to the Mount Phousi Temple for sunset. 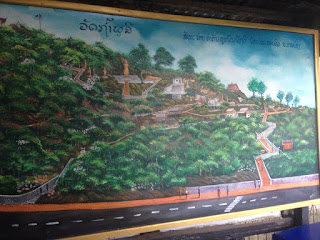 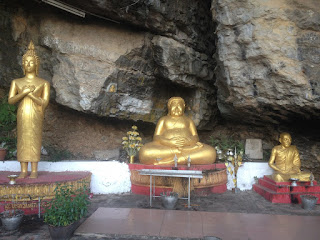 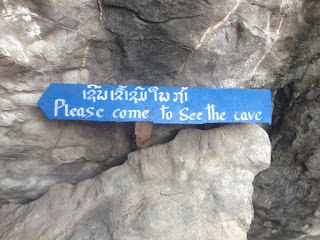 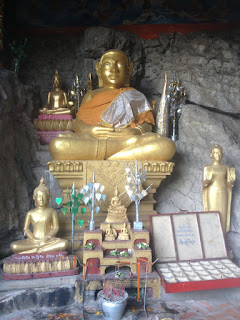 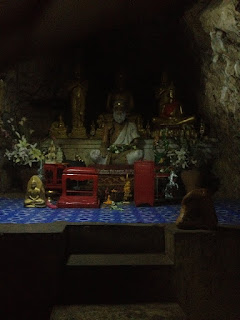 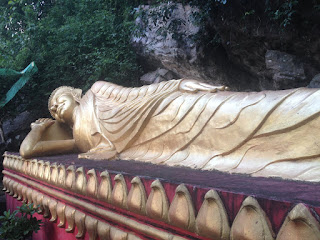 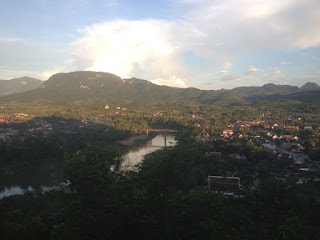 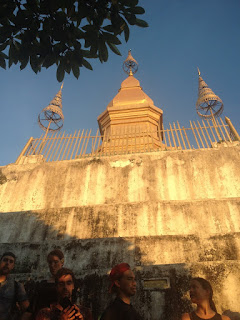 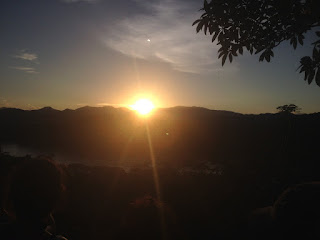 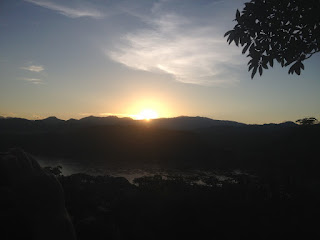 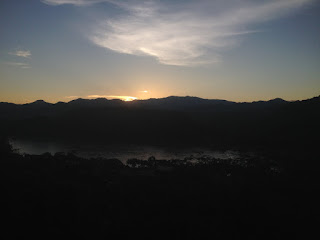 The sunset wasn’t mind-blowing, but it was really nice and more popular than I’d expected.
For dinner, we went to this amazing restaurant in the night market, where you pay less than $2, receive a big bowl, and you fit as much in it as you can. Mine was overflowing, of course.
Since I needed to head back south to fly to Bangkok, I planned to head back to Vang Vieng—rather than continuing north, as I’d originally planned—on my way returning south. I was actually pretty excited to go back, messaged 2 friends I’d made there, and they were still at the hostel / pumped to see me the next day.
Luang Prabang was short-but-sweet, and I liked it. It was hard for it to match Vang Vieng in my recent experiences, but it was good, and I had good memories of the place to take with me.
The next morning, I got picked on time by the tuk-tuk from the bus company and headed off to retrace my steps south.
Next post: Vang Vieng, take 2.
19.8833959102.1346874
This entry was posted in asia, lao, laos, luang prabang