Vang Vieng, Laos – loved it a lot, even without drinking its copious alcohol

July 20, 2016November 12, 2017 By The Wandering Vegan
From Vientiane, we took the mini-bus to Vang Vieng, further north in Laos. This city has a reputation for big an alcohol fest, but it’s also known for great nature, hiking, and a really relaxed vibe, so I definitely wanted to go.

In the past, there were so many readily-available bars and drugs on offer that young travelers were dying at a rate of roughly 2/month, because they’d drown while swimming or from alcohol poisoning, etc. After the government started clamping down on this in 2014, things have changed a lot.

J & M didn’t really have any plans for Laos, and I mentioned going here, so they decided to ride along.

First up, the bus stopped for a bathroom break at a place with some great signs. 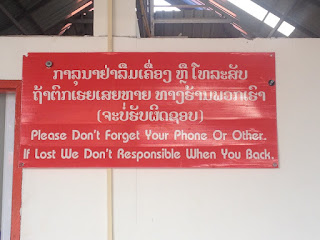 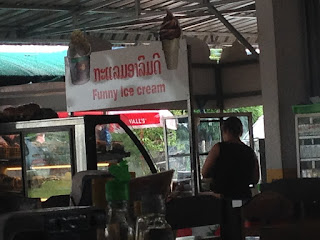 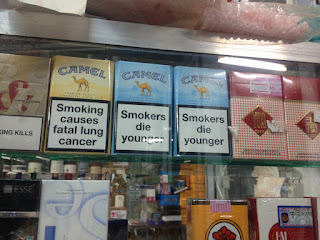 We arrived in Vang Vieng after 4 hours, and it was just as beautiful as we’d expected. We made our way to the Easy Go hostel on the north end of town, and I cannot describe how happy I am to have stayed there. Really relaxed, friendly vibe from the staff and all of the other guests, decent location, good services. I loved staying here. It felt like you were visiting family or long-time friends, not just a place you were paying to stay. 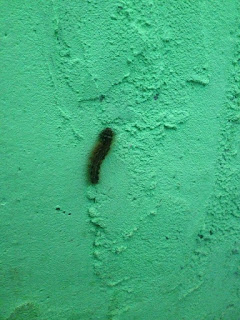 That first night, after I had dinner on my own at Veggie Tables (the English Breakfast was a great choice!) we went to the famous Sakura Bar, because they have free drinks for an hour, and then it turns into a dance party later in the evening. Even though I don’t drink alcohol, I had a blast. I had a few free Cokes, danced until almost midnight, and had a great time with the big group from the hostel that went out together.

The famous thing everyone does in Vang Vieng is tubing down the river. You pay a few dollars to rent a tube for the day, they drive you up to the start point in the back of a truck, and then you ride down to the city on the river current. Along the way, you stop at some bars for games, drinks, music, etc.

As long as you get your tube back to the rental office by 6pm (and in 1 piece), you get your deposit back. Eating dinner along the path to the return spot became a favorite activity of mine, because you can harass the people who are late/won’t be getting their deposit back. I digress…

We had a huge group of guys from our hostel, and it was a great time on the river. The first stop had a game of “musical tubes,” much like musical chairs. M managed to get into the final 5, and people were pretty cutthroat on this. Good times. 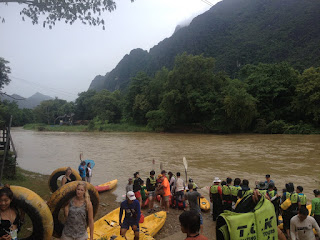 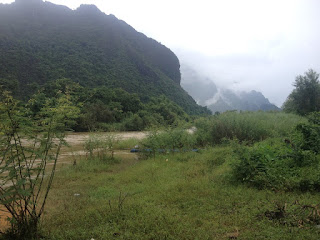 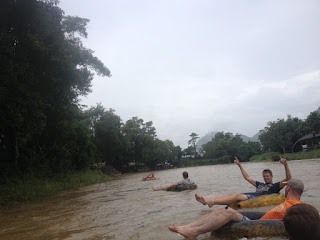 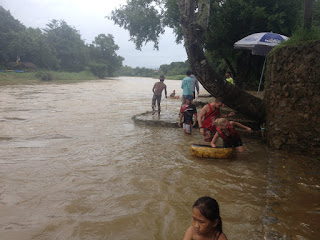 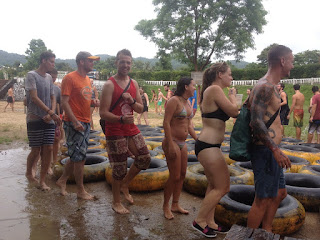 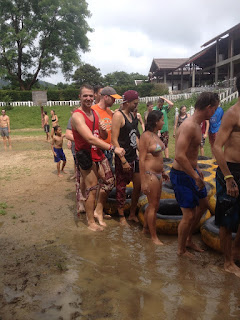 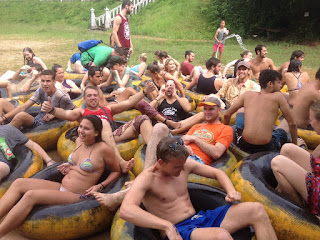 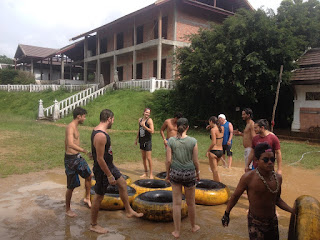 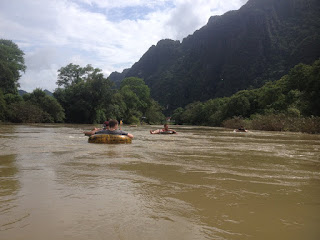 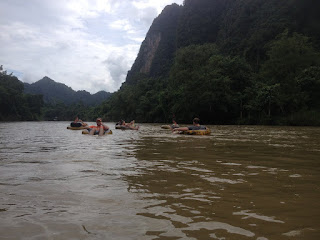 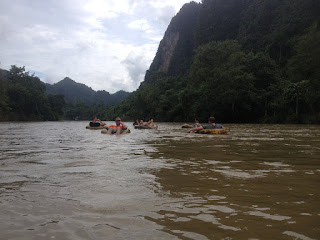 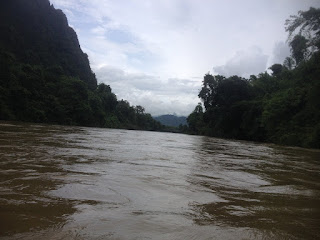 The river is quite muddy, so it doesn’t look that pretty, but the views are awesome. There’s something so fun and so peaceful about it.

We also attacked a group of kayakers coming down the river, and their guide was NOT happy about us flipping some of them over. We thought it was hilarious, of course.

I need to add a funny experience here: while in the truck to ride up to the starting point, I overheard 2 girls talking about how they didn’t like all of my tattoos, but in Portuguese. You can’t assume people don’t speak your language… I mentioned it to one of the guys from my hostel, and the guy sitting next to me turned out to be Brazilian. We started speaking in Portuguese, and – of course – the girls looked aghast when they realized that I probably understood/heard them.

At one of the stops, the Brazilian guy introduced me to his friends, some of whom were from the same city as where I had lived, and we started talking about which local football teams we like. OF COURSE, everyone liked the same team as me, except 1 guy. We all made fun of him. His facial expression was something like, “How am I in Laos having my team made fun of by an American guy speaking Portuguese?” It was great.

Back at the hostel, my friend R had arrived. We met in North Korea, and now we were meeting again, in another communist country. I see a trend here… We went to dinner together, made plans to explore the next day, and then everyone from the hostel went back to Sakura again. A pattern was developing.

The next morning, though, I learned something interesting. R had left earlier than me from Sakura and walked back to the hostel with a few of the guys. She wound up walking back alone and wasn’t sure where the guys had gone. Turns out, the stopped for a minute to light a joint and smoke some weed while walking back, got arrested, and went to jail. In the end, they were offered the chance to spend 30 days in jail or pay $600 US to make it “go away.” Bribes can sometimes make your life easier…

Day 3, R and I rented a scooter in town and planned to go check out some caves in the area. We wanted to go to some of the lesser-visited sites, to avoid the crowds, so we got directions and headed out. R rode on the back and took pictures/made jokes in my ear while I drove. Along the way, I managed to wreck the scooter into a ditch at the side of the road. We were on an unpaved, muddy road, covered in water, and the wheels lost traction. Falling into the grassy ditch was probably the best thing that could’ve happened, because it was a rather soft landed, prevented serious injuries, and prevented damage we’d have to pay for on the scooter. We both have a few bruises, but it’s a story and not a real injury at this point. 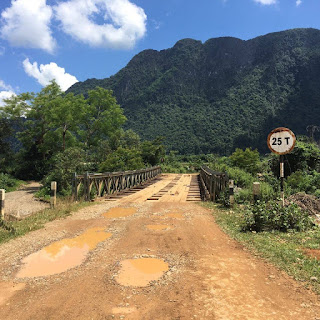 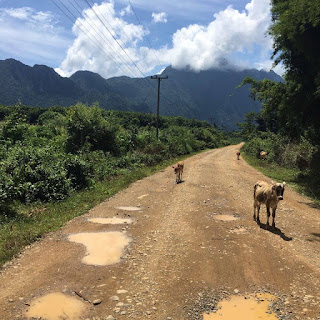 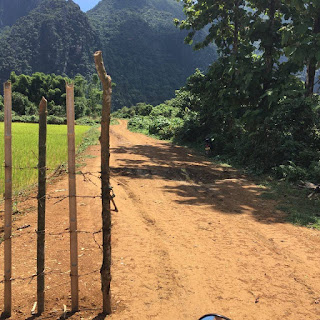 After seeing a rather unimpressive cave, we headed back to town, washed the scooter to try to cover up the evidence of the wreck, and then had dinner with a big group from the hostel. 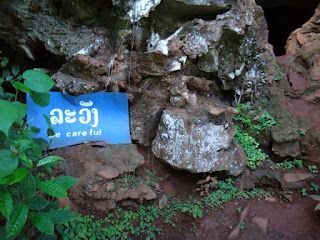 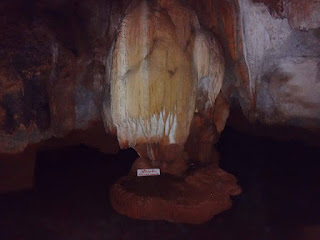 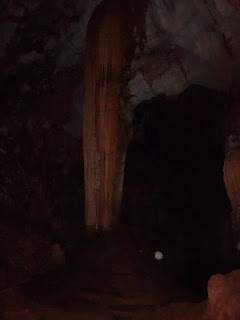 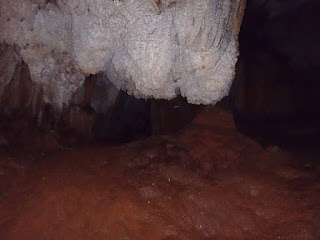 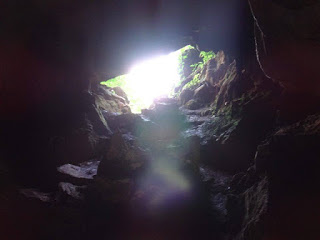 R didn’t feel like going out, but I joined the nightly group of people dancing the hours away at Sakura bar. Some of the hostel employees joined us, but they didn’t realize dance or do anything—motly wallflowers, but we were really happy that they came out with us for a fun night. Dancing for a few hours after a scooter had landed on my foot/ankle earlier in the day may not have been the smartest thing I’ve ever done and may explain why I still have some swelling/bruising a few days later. However, I don’t need an amputation, so it’s all good. I just feel terrible for wrecking it with someone else on the back.

The morning of day 4, R was continuing her journey south, as I continued mine north. We had originally discussed going to Phonsavan, to the east, which has the UNESCO site “Plain of Jars” and one of the most heavily-bombed areas in history. However, it’s a full day to get there, a full day to get back, and a day to explore. We weren’t so excited on it that we were willing to give 3 days, so we skipped it. I took the morning bus to Luang Prabang, and R went with a bunch of other people from the hostel down to Vientiane.

When the bus came to pick me up, the door was still sitting open, waiting for other people, and I nearly jumped off to stay in Vang Vieng. There’s something about that town. It’s a small place, and you keep running into the same people everywhere. Eventually, you feel like you know everyone in town, you run into 6 people you know on the way to the market for a snack, and it just feels awesome. It has a magical draw, and I wasn’t sure I wanted to leave. I was so close to getting off the bus, which is something I’ve never done.

The door closed, I stayed on, and the bus was off to Luang Prabang, another popular destination for travelers in northern Laos.

Thanks for the amazing memories, Vang Vieng. I’ll cherish them always.