August 1, 2016November 12, 2017 By The Wandering Vegan
My time in Laos had come to an end, and it was time for me to literally do “planes, trains & automobiles” to get to Pyin Oo Lwin, Myanmar.

I had a really great experience getting from my hostel out to the train station and taking the train to Bangkok for my trip to Myanmar.

The van that picked me up only picked up 1 other person, a French girl, who was heading home to her job in Thailand. We spoke in French, and she helped me practice my rusty 2nd language. We got to the train station unnecessarily early (2 hours) and paid our “special fee” (read: bribe) to get our passports stamped to leave Laos. $2 isn’t a huge deal, but the principle is annoying.

We played around with the miniature plastic football/soccer ball she’d bought, since they’re all the rage these days in southeast Asia, and I was significantly better than her, which was hilarious. We boarded the shuttle train from Thanaleng and commuted over to Nong Khai for arrival in Thailand.

Laos gave me some amazing memories, great new friends, and challenged me to grow as a person, from some of the deep conversations I had while there. Thanks for the memories! 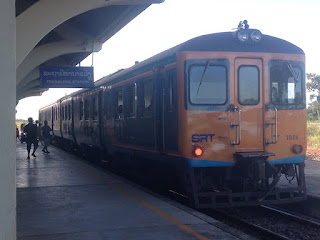 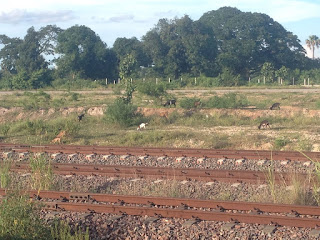 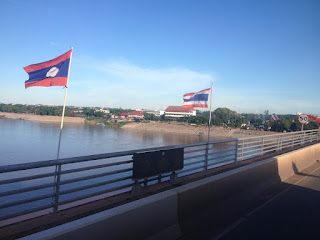 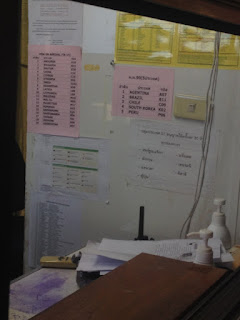 When we arrived in Nong Khai, we saw a huge market near the station and figured that we should go there for dinner between trains (nearly 2 hours). The problem was that no one would exchange my Lao Kip, so I needed to use the ATM to get money for the market, then we had no idea what to do with our bags (carrying them through the market seemed undesirable). We heard some people speaking French, so we asked them if they’d watch our stuff while we headed to the market.

They agreed to watch our stuff, and our conversation got interrupted by the daily playing of the national anthem at 6pm. Interesting spectacle. All conversations end, everyone stands, etc. 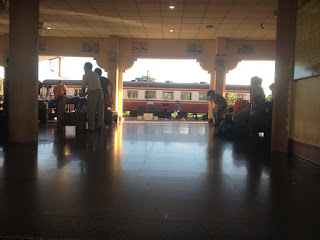 Going to the market with M, the French girl, turned out to be AMAZING. She speaks Thai and was bartering really hard for prices on the food. I wound up getting a giant bowl of sticky rice, a fresh fruit smoothie, and some noodles with vegetables, all for about $2. 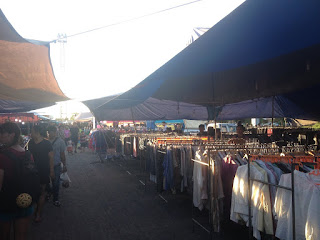 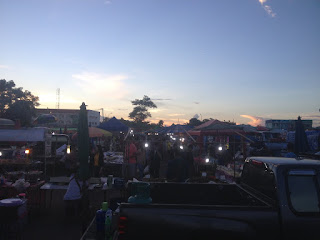 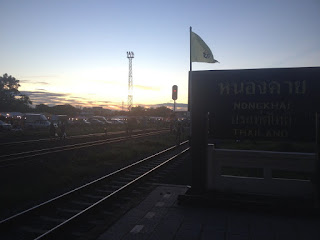 We caught the sunset back at the train station and then boarded into separate cars to our assigned seats. It had been a very multi-lingual day for me, and I was feeling quite proud that I’d spent several hours speaking Spanish then several hours speaking French, all after starting my day watching a game online in Portuguese for 2 hours.

There wasn’t much “awake time” on the train, because the attendants came around pretty quickly to make the beds, and that kills any hangout time, since the seats become the lower bed. No one with a lower bed wants the stranger from the upper bed hanging out on your sheets & pillow. I moved into my upper bunk but conversed with a group of Dutch guys around me. I’d overheard them saying that they were going straight to the airport for a flight to Myanmar, which was my plan.

They were actually flying to the south of Myanmar, but we agreed to share a taxi to the airport in the morning, saving some money for everyone.

In the morning, the attendants actually woke us up asking if we were going to the smaller, Don Muang airport. We were, and the train was pulling into the stop at the airport that moment. They actually held the train for us to grab our bags, throw our shoes on, and get off. That would never happen in a Western country. Thanks so much!

Since we were at the airport now, we were 1) much earlier for check-in than necessary, and 2) no longer needed the taxi, so it was a mixed blessing. I got some breakfast and read while the Dutch guys played cards. My flight was at 10:45, about 4 hours away. The Dutch guys had to kill another 2 hours after my flight, so I wasn’t envious.

Once check-in opened, I dropped my bag at the counter and went through security, telling the Dutch guys we’d probably run into each other in Bagan, in the center of Myanmar, since we were working in crossing paths. At my gate, I felt much more comfortable falling asleep, because it’s more likely that someone will wake you up and ensure that you get on the flight, rather than just sitting outside the security area, where no one knows what you’re waiting for or for how long.

Upon arrival in Myanmar, I showed my approval letter for the visa-on-arrival, filled out my customs forms, and even got a smile from the passport control agent. That’s a surprise! 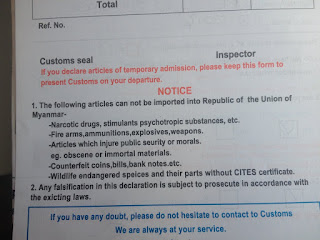 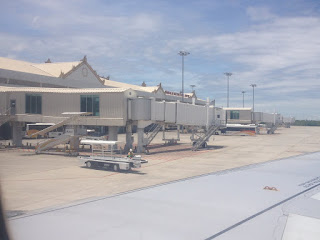 I was in Mandalay at this point, which several friends had told me to use simply for its airport but to skip the city as dirty/uninteresting when compared to the rest of the country. I exchanged all of my Thai Bhat (first place was only offering 85% of the prime rate, while another offered me 95% of the prime rate, so that worked a lot better for me) and went straight to the tourist information/bus ticket desk in arrivals and bought a ticket for Pyin Oo Lwin. Intersting note: if you paid in dollars, the ticket was $4 US. If you paid in local currency, the price worked out to be around $3.20. 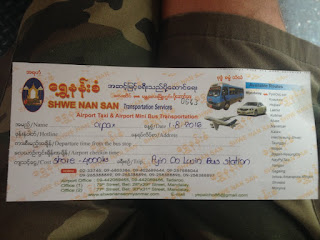 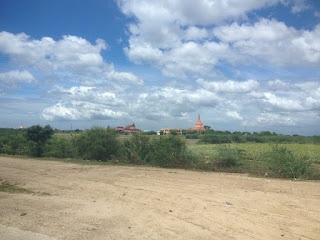 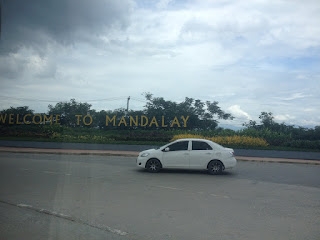 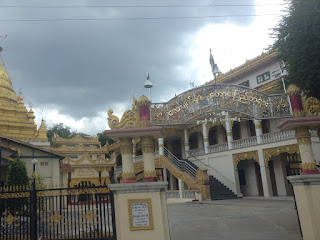 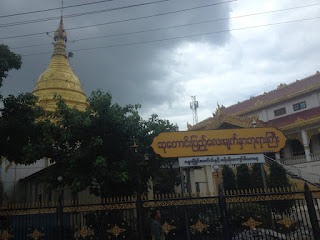 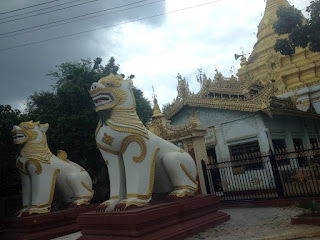 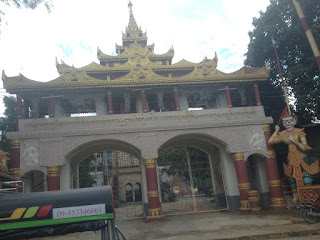 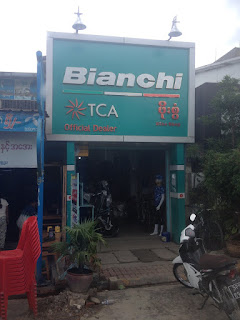 I rode in a shared van with about 15 other people, mostly tourists, plus 1 local. After we’d dropped off a few people at their hotels and seemed close to the main bus station, a taxi driver approached the door of the van and pointed to me and the local, saying to come with him. I wasn’t too sure what was going on, but the van driver/bag handler seemed like this was what was supposed to happen, so I got my bag and got in the car. I thought he was just shuttling us over to the bus station, but we headed out of town. Somehow, my bus ticket turned out to be a ride with just me and a local, plus the driver and his wife, for 2 hours up to Pyin Oo Lwin. 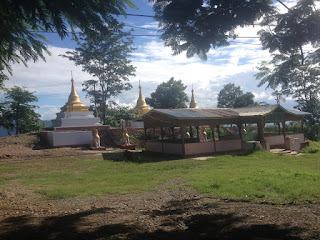 There were definitely some strange moments on this ride, but not in a bad way. First, we had to pay a road toll to some police sitting in chairs at the side of the road. We simply slowed down, the driver through money out the window, and we kept driving, while the police stood up to go retrieve the money we’d tossed. Odd.
Next up, we stopped for some lunch. This is normally not odd, but I have the feeling that the restaurant we ate at doesn’t allow women. The driver’s wife stayed in the car and didn’t join us. I saw no women inside and observed another car with a woman waiting in it outside. It comes off like women aren’t permitted. I had some mediocre vegetables/rice + tea for $1, so not bad, but I got the creeps from a restaurant that seemed to forbid women, while the men sat inside eating, smoking, drinking beer, and watching UFC.
Next, we stopped for gas to fill up the car, and they asked if we wanted some juice. I said, “Sure,” since they were offering it on a tray next to my window. “Juice” is used loosely. It was basically flavored sugar water. Again, the driver’s wife wasn’t offered any. Only the 3 men drank.

The last weird thing was that the other passenger wanted to take a bunch of selfies with me (he’s about 50 years old) in the back of the taxi. Happy memories, guy. You met a white person! 🙂

We drove like a bat out of hell through the mountains, passed trucks using the opposing lane / the shoulder while going around curves, and I passed a 7-8% chance of dying, so that was a pretty good ride.

I got dropped off at the guest house I’d booked in Pyin Oo Lwin, and I was ready to explore Myanmar—country #83.

Next post: the famous train from Pyin Oo Lwin to Hsipaw, and then disaster strikes.