Back in Amritsar for a day

September 27, 2016November 12, 2017 By The Wandering Vegan
From McLeod Ganj, I needed to go back to Amritsar.
My original plan for India had included more of the “kill myself” type of travel I’d done at the beginning, seeing Jaipur (another fort city in Rajasthan state) and then Rann of Kutch (giant salt flats where the horizon becomes indistinguishable) and Bhuj, both in Gujarat state in the far west of India, under Pakistan.
Now that I’d gone north, instead of south, from Amritsar, I needed to a) go southward, b) get to Bombay for my flight leaving India on the last day of my visa, which was fast approaching. There is an airport near Dharamsala, but it’s quite small; I found a really cheap flight from Amritsar, though, on the day before leaving India, so that meant I could spend 1 day more in Amritsar, then the last day in Bombay, then leave. Perfect.
Now, I just needed this crack-of-dawn bus back to Amritsar. After a bunch of messing around and “no one works here” at the bus station, I finally put my bag in the luggage space underneath and got on to settle down for some more sleep.
That idea was short-lived. The A/C was on BLAST. I’d prepared, but not well enough. Even with long pants, a long-sleeve shirt, socks, and using my towel as a blanket, I was shivering. The bus departed around 6:30; at 8, we stopped for a bathroom break. After this, the driver turned on music at full volume, and any thoughts of anyone sleeping disappeared. It’s fine if you want to listen to music to stay awake or pass the time, but we don’t need it in the passenger compartment, not at this time, and not at this volume.
Shortly before noon, we arrived in Amritsar back at the “this isn’t really a bus stop” outside the company’s office, where I’d departed from days prior. As we were getting close, an Israeli couple in front of me started asking people about places to stay. They were winging it and didn’t know any names or places at all. I suggested Jugaadus, where I’d stayed before and was going back to, because it’s cheap, comfy, and has good tours. I totally sold them on the border tour with the weird temple. 2 British guys in the row in front of them overheard me and said they were also going to Jugaadus, so we agreed to all share a tuktuk to get there.
When we got off the bus, I bartered for 50 rupees/person for a tuktuk (65 cents) to take us all, and we were off. It was awesome seeing the “comfort first, check-in second” style at Jugaadus again. They invited us to drop our stuff, relax, have some tea, etc. and then check in after we were comfortable. What a great atmosphere. The Israeli couple signed up for the border tour that afternoon, and the British guys for the following day. I should get a commission.
I signed up for the Golden Temple tour that evening. It said 8-11pm, and I had to get up early the next morning, but I wanted to learn more about the temple and Sikhism. I’d read the Wikipedia article on Sikhism during my previous stop in Amritsar, but that’s not the same as learning from a local who follows the religion.
After having some snacks to tide me over until the dinner at the temple during the tour, 8pm arrived. Everyone else on the tour backed out, and the guide asked me if I still wanted to go. “If you’ll take me on a solo tour, I’m still interested.” We were off.
My Austrian friend, L, had gone to a small village for a few days and was on her way back to Amritsar. She planned to join the tour and arrived just as I was leaving with the guide. “Let me take a shower, then meet up with you.” After a 5 hour bus ride that afternoon, I wasn’t shocked that she sent me a text saying she was going to pass on the tour.
This turned out to be better than expected. I asked tons of questions in a 1-on-1 session, and we didn’t spend much time walking around sightseeing, since I’d been to the temple twice already. We sat down in a corner at one point and just talked about the beliefs and history of Sikhism, “why Amritsar,” and other aspects of my curiosity. It’s a really fascinating story, and I won’t share it all here, but I really respect their views on food and hospitality: everyone needs food and shelter, no matter your status, and we are all the same in that regard, so the caste system is pointless. I dig it.
After all of this, we went to the dining area and had a meal with everyone. I also got a tour through the kitchen to see how they do things; it’s a serious operation! They actually have a machine that turns balls of dough into the flat, toasted chiapatti bread served at meals. When feeding 75,000 people, I guess you need things like that, in addition to the plentiful volunteers washing dishes! 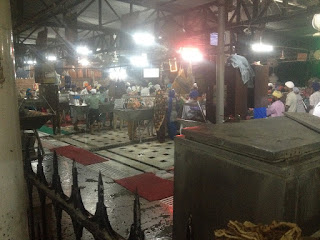 I told the guide that I hadn’t been inside the actual “Golden Temple” part of the temple, because the line was too long on my previous visits. The line was really short, so we got in. An interesting part of Sikhism is that they believe their scripture is a living document, teaching them about God, so it also needs to be put to rest at night and woken up in the morning. There’s a ceremony for this, and I asked about what to do, if the procession to take the original, first “bible” (don’t know what to call it) of Sikhism to bed, and if it passes us. Answer: stand still, don’t talk, and be respectful as it goes by. Got it.
We went into the center of the temple and got to say the band playing the music and the teacher chanting the verses over the microphone, which can be heard throughout the temple complex. They read/chant/sing the entire book out loud every day, and they’ve been doing it for hundreds of years. That’s impressive.
From here, we went on top of the golden part for some great views around the temple complex. There’s no photography allowed at all within the golden part of the temple, but trust me that the views, decorations, and atmosphere are all amazing.
Shortly before 11pm, I was back at the hostel. The tour was “tips only,” and the recommended amount on the board was around $1.50. I felt bad to give only that, because the tour had been great, and 3 hours of the guy’s time for only $1.50 seemed unfair. I gave him $3, and he was super happy about it. What a deal, for such a great tour.
I took a shower and then spent some time messaging a guy back and forth online. Someone from the tour company I went to North Korea with had messaged me, saying they had an American booked on a tour in 2 days’ time, and he was freaking out a bit, unsure whether he should go. They put us in touch for me to share my experiences, and I told him to go on the tour. You have to TRY to have problems in North Korea, and I showed him my blog post from the trip. The conversation ended with him being really excited for the trip, and I was happy that he’d get to have a great, unique experience that many people never do: seeing North Korea.
I’d managed to hold off my numerous bathroom trips from what’s called “Delhi Belly”—the stomach sickness all foreigners seem to get during extended trips to India. I was happy about that, but it was in full swing back at the hostel. Such is life.
I hit the hay after scheduling a tuktuk to the airport for 5am the next morning. I’m definitely not a morning person and wasn’t excited.
5am rolled around, I was ready, and the tuktuk never came. At 5:30, I went out to the street, flagged down a random tuktuk, and negotiated for a ride to the airport. The guy knew I needed him more than he needed me, so I paid more than I should have. Instead of $6, I had to pay $7.50, which still doesn’t break the bank, but it’s the principle!
I checked in, got comfortable, and waited to board. Amritsar is an amazing city and one of the best parts of India. I think the combination of the vibe at the temple and the vibe at the hostel are what made me love it this much.
Thanks for the memories, Amritsar.
Next up: Bombay and my last day in India.
31.633979374.8722642
This entry was posted in amritsar, asia, india